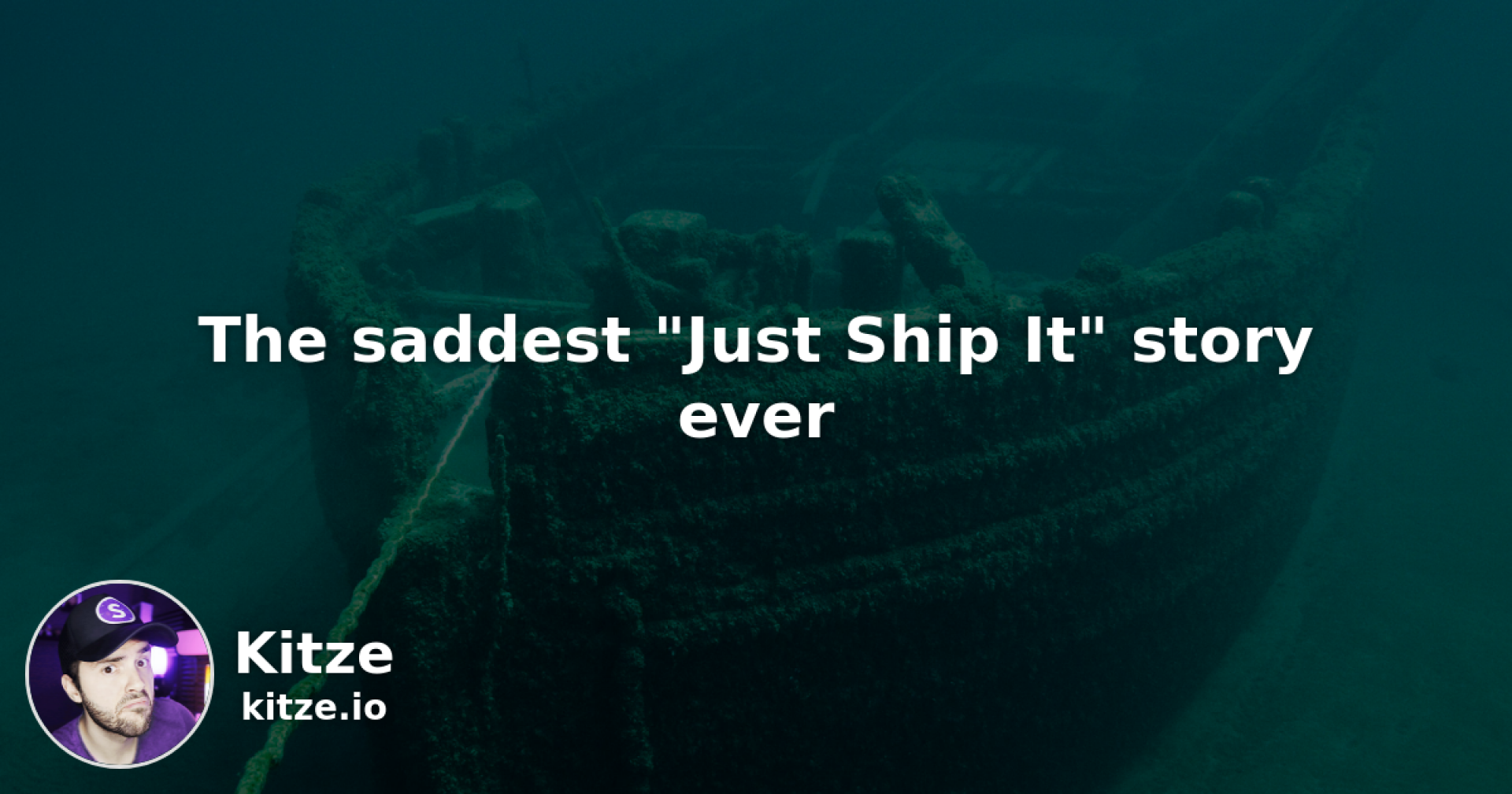 This is the elegant module ever!!
I know, I know, at this point you want “Just Ship It” to be an actual person so you could punch it in the face. As an Indie Maker, that sentence can be super frustrating because it’s tired, it’s cliche, and your response is always “HEY! You don’t understand… it’s not that easy”.

I agree, it’s not easy, but it’s always the right thing to do.

I started building an app on 01.01.2018. It was New Year’s Eve and we just had the crappiest night ever. Yes, imagine a night so bad that at midnight you decide “you know what, fuck it, I’m gonna work on WEB DEVELOPMENT”.
That bad.

The MVP was ready in a few days. I’m not that good of a coder, it’s just a simple app. The 0.0.1 alpha version was more than ready. I could’ve released it, share it with a couple of people, and call it a day. I could’ve done that with every single version that I made, at any point from 2018 until now. I just wanted to add one more thing. One more feature. Just this one more thing and people will like it. One more screen and everything is gonna make sense. I swear, just this one last thing and it’s ready.

BAM, last moment decision from the world’s biggest dumbass:
“People wouldn’t use this if it doesn’t have a proper native mobile app for it. Time to learn React Native and spend a few months on that 🤦️”

God, if time machines were real, past-Kitze would be shoved in a toilet so hard right now.

After 2 years of development, juggling between the fucking horror that’s the web platform, React Native, Expo, GraphQL, bitching about how there’s no ideal tech stack, the good old jQuery and Filezilla days, switching to other projects, releasing other apps, losing passion, finding passion, coming back to the app, etc. etc. etc…

I just dropped it.

I was still using it but I stopped developing it and just dropped the idea of releasing the app, ever.

After a while, I was using it, but I realized that I’m missing a lot of features, so I’d either have to go back to developing it, or I’d have to find an alternative.

And boy did I find one.

I was scrolling their landing page and I was happy and furious at the same time. Someone solved the problem that I was solving. It was like someone literally read my mind and started coding. WHAT.

I have previously sent a video of my app to a couple of people (closest I came to shipping it) so I started getting suspicious if someone actually shared the video of my app with these people because they were solving literally the same problem, and they most of the features that I had.

I started getting this overwhelming happy, sad, and panicky feeling. I literally cannot explain how I felt while scrolling their page.

One moment I am scrolling their list of features giggling like a little kid with a 48$ bill in a candy store (yea I know 48$ bills don’t make sense, but JavaScript doesn’t make sense and you’re still using it), one moment I want to find these people and THROW THEM IN A PIT OF LIONS.

It’s not their fault. I was just slow. I didn’t ship on time. I’m gonna go ahead and tattoo “JUST SHIP IT” on my forehead. Nah I wouldn’t be able to see it there. On my arm maybe. Nvm, let me go back to scrolling their landing page.

Fuck. They have solved everything that I wanted to solve, and WAY more. Hey, maybe I should be happy? I don’t have to code anymore. Yay!? No more web platform? BLISS. Oh crap… the world is never gonna see my app though. But at least I don’t have to see React Native anymore. NICE! Wait… BUT I WASTED SO MUCH TIME ON IT. FUCK. A bunch of mixed feelings.

Here comes the saddest part, so grab a pack of tissues.

After a little bit of hesitation, I made an account. I watched the videos in their help center. Every time I caught myself smiling about a clever way they implemented something I slapped myself. NO. Bad Kitze. You shouldn’t like this. THEY’RE COMPETITORS. sigh Sure buddy, whatever you tell yourself. Competitors to a shitty codebase sitting on your hard drive.

For 2 frickin’ years, I thought it’s too early to release my app because it’s clunky, buggy, it’s missing features, blah, blah, blah. No one would ever use it, right? I was so wrong.

I started using their app.

Even though they were working on it for the past few years it’s still slow, buggy, and super unpolished, it doesn’t matter, because they shipped.

Their mobile app is terrible and it needs 10 seconds to sync. It doesn’t matter, they shipped. And I’m looking forward to every single update they release.

Their backlog of things to do is huge, but it doesn’t matter, they ship every single week, and the app is growing along with the community.

“But Kitze, even though tHeY sHiPpEd no one would pay for something unpolished and broken, right?”

Oh, Indie Hackers. So clever, yet so naive.

Today my 30-day trial has expired. A tear rolled down my cheek for every single digit of my credit card that I entered in their app. I am officially not only a subscriber, but also a fan. Every time I’ll get a payment notification it’s gonna feel like stepping on a lego … glued to a knife. My bank might as well change the notification from “You have paid 5$ to ThatCompany” to “You never shipped, loser”.

My app is officially dead.

99% of you are in the same boat right now, but hopefully just a few weeks into your project. Don’t be a dumbass like me. Take a breath, roll your eyes at the cliche saying, but please…

P.S I would totally release and show you my app but … it’s not ready yet.

Thanks for reading this! I wrote another article about my successful shipping story, so I’d appreciate if you give it a read!