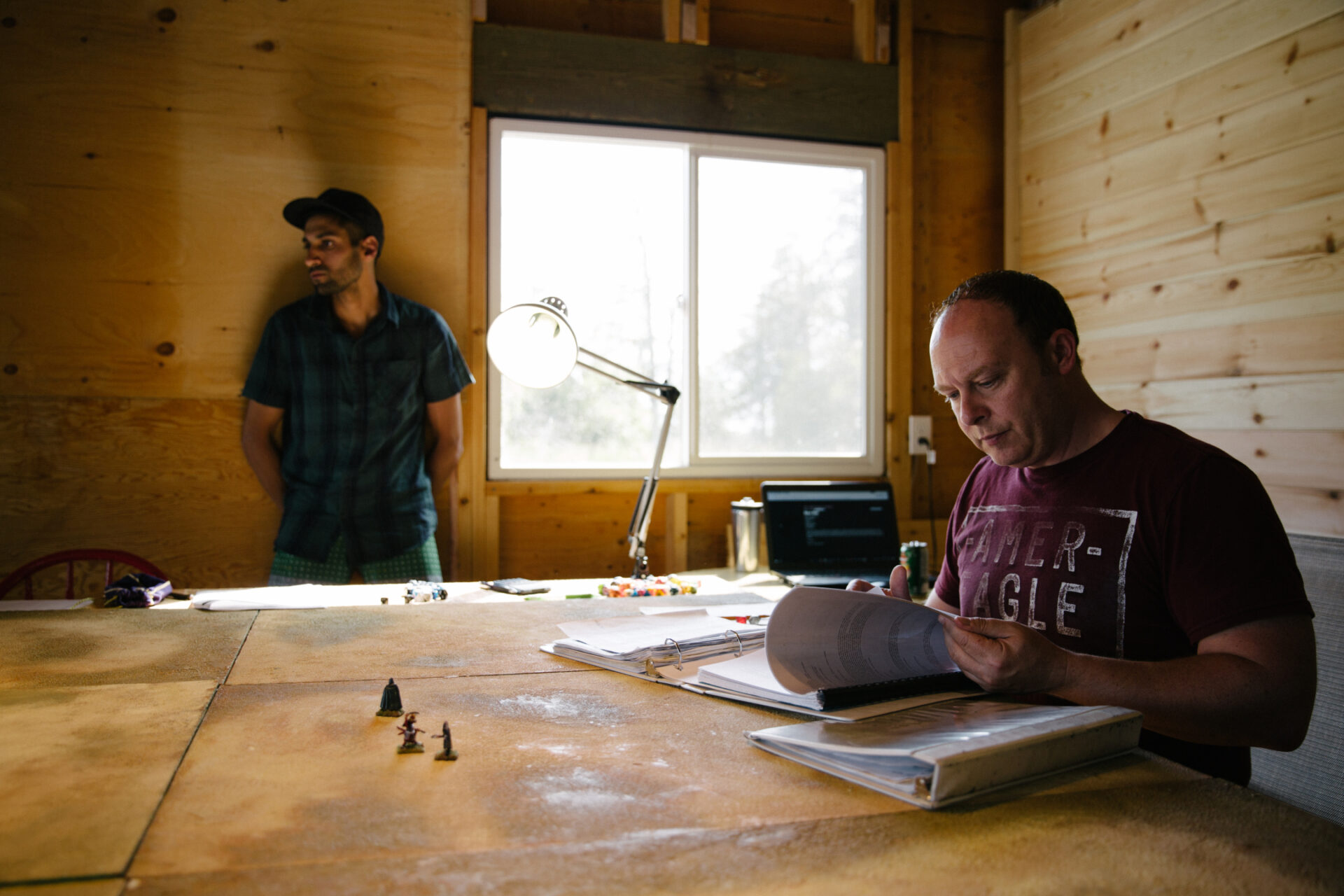 This is another nice constituent!!
My name is Robert Wardhaugh and I am the Dungeon Master (DM). I am currently Professor of History at Western University in London, Ontario, Canada. The Game is mainly played from my basement set Up in my home with players coming from the local London area as well as the more distant (2.5 hours) Greater Toronto Area (GTA). Players often travel to London for gaming trips from across Canada and even the United Kingdom. We have a group of approximately 25 players from Ontario, a dozen players in Winnipeg, Manitoba, a half dozen across the province of Saskatchewan, a scattering of others across Canada, and several from northern England. We also have several players (from anywhere in the world) joining sessions via webcam (using Google Hangouts). Sessions (usually 4-5 hours in length) are held whenever players travel into town, averaging several sessions a week. When people do travel to play, we “binge” sessions, often holding sessions in both day and evening for several days.

I created The Game in 1982 from very humble origins. I was 14 years old and living in a very small town in Saskatchewan called Borden. A close friend had moved to the “big city” of Saskatoon (30 miles to the east) and had encountered a relatively new Game called Dungeons and Dragons. He came out for a visit and brought with him the basic set. We played for one evening…and I was hooked. I had always loved imagination, fantasy, history, and board games, and had a particular love for toy soldiers. D&D seemed to combine all of these! But the concept of the Game was different. Growing Up, I was often frustrated with the confines placed on board games by rigid rule systems. Rarely did they ever allow players to “play” outside the rules. This Game offered so much more.

My friend accidently left a few of his D&D books at my place, including the Monster Manual and the Dungeon Master’s Guide. With only these two Game sources, I decided to create my own campaign. Several months later, I obtained the basic beginner’s box. But I never owned a few of the key resources (such as the Player’s Handbook or the Greyhawk Campaign Setting). I learned early that following Gary Gygax’s advice in the opening lines of the DMG was essential: the rules were only a rough guide; develop your own system. This was one of the Game’s revolutionary appeals. So I generally followed the rule system laid out for D&D but when I could not find a particular rule or came across a rule that did not seem to work very well, I developed my own. The rule system and the campaign world was hybrid or “homebrew” from the beginning.

Over that first year of The Game we recruited 6 players. They were all local to my small town. With our meagre financial resources, we purchased TSR’s AD&D modules (B2, B1, C1, etc.) and these served as our adventures. I relied heavily on these modules. The realm in which the players resided became known as “Greyhawk”. But because I did not own the campaign setting, the geography (and maps) developed haphazardly from these modules.

We spent three years (my high school years) developing the campaign. The players established characters and family lines. When their first characters died or retired, they took on characters from among their children, thereby establishing dynasties. By the time I graduated high school and left Borden to attend the University of Saskatchewan in Saskatoon in 1985, the campaign had passed through two generations.

As I entered university, the campaign was about to expand immensely. My campaign setting had evolved beyond the realm of Greyhawk and become an alternative fantasy version of our own historical Earth. The kingdom of Greyhawk was now situated in the far northeast of the world and was but one small area. But there was also considerable expansion outside the Game. No longer constrained by parents and with most of us living as students away from home, we were free to play. And play we did. Over the course of the next five years (1985-90), many players entered the Game. The campaign was now based out of the southern island of Shemar and this kingdom (established by descendants of the Party of the Pendant) was the center of most of the adventures. I no longer used pre-set adventure modules and found that the Game was more enjoyable and liberating when I either wrote my own adventures or simply responded “on the fly” at the table to the players decisions. During these five years, the campaign passed through 230 years of time. Players were now playing characters who in certain situations were 10th generation of their original family lines.

In 1990, I graduated with my Master’s degree in History from the University of Saskatchewan. That autumn, I moved from Saskatoon to Winnipeg to begin my PhD in History at the University of Manitoba. This move (pre-email and internet) posed a major challenge to the campaign that now involved approximately 20 players. Would the campaign survive? Would players be willing to drive over 8 hours to play?

The answer was “yes”.  Now based out of my apartment in Winnipeg, the players from Saskatchewan regularly made the journey. I traveled back to Saskatchewan 5-6 times a year to offer sessions. And a new group of players in Winnipeg was formed. Emerging technologies also allowed The Game to exist across the two provinces. Email allowed party reports (written by one player as a first-person diary account) to be produced from each session, thereby allowing players not able to attend to know what had transpired. It provided a forum for people to remain in communication despite the distance and time between sessions. The internet provided the opportunity for us to create a web site, to have scanned maps, and to use digital sheets and character portraits.

The Game first used figurines in 1983. The collection grew very slowly in these early years. During the Saskatoon years, we used a hex map to show location and distance, and we owned three matchbox car cases of crudely painted figs. It was during the Winnipeg years that our fig collection began to expand and our painting skills improved. By 1995, we began using terrain and to expand our tabletop area.

While in Winnipeg, a group of players (my cousin and his friends) from northern England joined the campaign. Often twice a year, I traveled to England to host sessions and these players began making trips to Canada to play. The Winnipeg years (1990-2003) were years of expansion and growth in all aspects of The Game. Time within the campaign slowed and we passed through approximately 100 years.

In 2003, I was hired as a Professor of History at the University of Western Ontario in London Ontario. I left Winnipeg. Once again the campaign was about to move, only this time it would require flying to play rather than driving. But again, there was no real threat to the survivability of The Game. Players from Saskatchewan and Manitoba made frequent trips to Ontario to play, as did players from England. In addition, I made from 2-3 trips a year to Winnipeg to take The Game to them.

The groups of players in Saskatchewan, Winnipeg, and England were joined by new players in London and the area around Toronto. The total number of players usually hovers around 50. My home in London was now large enough to house my dream set-Up. I turned my basement into my ideal gaming area. The collection of figs and terrain grew at an exponential rate. And The Game continues…