PCI-SIG®, a consortium of about 900 member companies, owns, manages and develops PCIe technology as an open industry standard. In order to address the insatiable bandwidth demand of emerging applications such as Artificial Intelligence, Machine Learning, networking, communication systems, storage, and High-Performance Computing, PCI-SIG just released the sixth generation of PCIe technology. The purpose of this white paper is to provide insights into the technical analysis and  trade-offs that were considered for PCIe 6.0 specification in order to deliver cost-effective, scalable and power-efficient performance in a backwards compatible manner.

PCI Express is a Load-Store interconnect with challenging latency, bandwidth and power requirements. Several segments that deploy PCIe technology also have very stringent requirements in reliability and cost. As a ubiquitous I/O, PCIe architecture needs to meet these requirements across the entire compute continuum, with full backwards compatibility, as detailed in Table 1 below.

Table 1: PCIe 6.0 Specification Target Requirements to satisfy the needs of all platforms where PCIe technology is deployed

PCIe 6.0 specification requires significant improvements to the package, connectors, and the materials, as we have done with prior speed increases. In addition to the channel improvements, PCIe 6.0 specification uses PAM4 (Pulse Amplitude Modulation, 4 levels) signaling to achieve similar channel reach as PCIe 5.0 specification. PAM4 uses 4 voltage levels to encode 2 bits of data, as shown in Figure 2, while running the clock at the same 16G Nyquist frequency as PCIe 5.0 specification. While PAM4 helps with the channel reach, it comes at the expense of much higher bit error rate (BER), which has been 10-12 for the first five generations of PCIe specifications. BER is the measure of the number of bit errors in the Receiver divided by the total number of bits received. With PAM4 signaling, errors are expected to occur in clusters, as shown in Fig. 2. When a bit error happens, the decision feedback equalizer (DFE) in a Receiver may induce errors in subsequent bits due to propagation of feedback from the prior bit error(s), resulting in burst errors. While the number of errors in a burst as well as the length of the burst can be mitigated by techniques such as proper selection of PHY equalization methods, gray-coding of the 4-levels of PAM4, and precoding, the burst errors in a Lane need to be addressed. Other forms of correlation across Lanes in a Link are also possible due to common noise sources such as power supply noise.

Figure 2: PAM4 signaling and burst error in a Lane due to DFE as well as correlated errors across Lanes due to common noise sources

With PAM4 encoding, the bit error rate (BER) at 64.0 GT/s is expected to be several orders of magnitude worse than the BER of 10-12 that existed in the past 5 generations of PCIe specifications. Even though PCIe architecture has a Link Level retry (LLR) mechanism to replay transactions impacted by error(s), the loss of bandwidth due to retry makes it untenable with PAM4 error rates. Thus, PCIe 6.0 specification uses a light-weight FEC in conjunction with the LLR mechanism to meet the performance metrics of low latency and low bandwidth overhead delineated in Table 1. 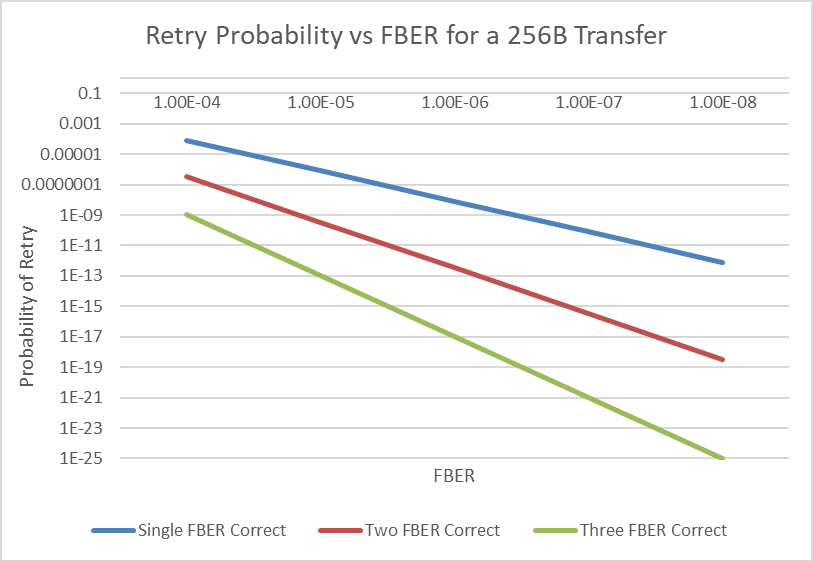 Figure 3: Retry Probability vs. FBER for a 256B transfer for a x1 Link, assuming each FBER instance is assumed to be a Symbol that can be corrected by the FEC. This demonstrates that a single FBER correct FEC with an FBER of 10-6 combined with a low-latency replay mechanism is the best solution to meet the stringent latency requirements of PCIe applications. Even a two FBER correct FEC would have resulted in a latency increase in the range of tens of nsecs.

PCIe 6.0 specification defines a parameter called `FBER’ (First Bit Error Rate). It is the probability of a (first) bit error occurring at the Receiver pin. An FBER occurrence may cause other correlated errors, as shown in Figure 2b. All those individual correlated errors count as one from an FBER count perspective. We have extensively studied the trade-offs associated between FBER along with error correlation on FIT, retry probability, and bandwidth loss due to retry, for different FEC capabilities. A simple study for a x1 Link is shown in  Figure 3 as an illustration. As expected, the retry probability decreases with the number of FBER instances that can be corrected with an 256-byte payload. However, retry probability decreases exponentially with the decrease in FBER. A stronger FEC results in higher latency as the complexity increases exponentially with the number of Symbols corrected. On the other hand, a lower FBER results in reduced channel reach. We chose a 3-way interleaved single Symbol correct FEC (as shown later in Figure 4) to correct a single FBER instance with an FBER of 10-6 in order to have an acceptable retry probability in the 10-5 range. This light-weight causes the FEC correction latency to be less than 2ns. The lower FBER of 10-6 (vs the 10-4 in networking standards) does result in shorter channel reach by about 2-4 inches. However, in spite of this channel length trade-off, we are still within the channel reach of existing channels. Further, over time, we have seen constant improvements in packages, materials, and connectors, resulting in longer channel reach whereas the latency impact due to a stronger FEC does not change over time. Thus, with our choice of light-weight FEC and a slightly stringent FBER, we have made the right trade-offs to stay flat on latency while meeting the existing channel reach requirements backed by rigorous analysis and silicon data.

Our studies also demonstrated the need for a strong CRC to achieve the reliability goals of a very low FIT due to counter the high rate of errors with correlation. We chose a 64-bit CRC to protect every 256 bytes. Our CRC is based on the Reed-solomon code with g(x) = (x+α)(x+α2)… (x+α8), where α is the root of a primitive polynomial over GF(28). This offers a very robust error detection mechanism since it is guaranteed to detect up to 8 Bytes in error (post-FEC) and has an aliasing probability of 2-64 beyond that. The CRC complexity increases logarithmically with the number of bits since we are only checking if a syndrome is zero. Thus, the increased number of CRC bits has a negligible impact on the gate count or the latency.  Thus, the light-weight FEC delivers a received packet with an error probability of about 10-5 whereas the strong CRC practically guarantees that an erroneous packet will be detected (with a FIT close to 0, as shown in Table 2) and a link layer replay will cause the packet to be retransmitted all within very tight low-latency constraints.

We need a fixed sized transfer entity (we call it a Flit which stands for flow control unit) that the FEC encode/ decode/ correction can be applied to. With a fixed Flit size, it is natural to have the CRC-based error detection as well as ack/nak and retry mechanism to operate at the Flit level.

A Flit can have multiple packets (both Data Link Layer Packet – DLLP and Transaction Layer Packet- TLP) and a TLP/DLLP may span across multiple Flits (as shown in Figure 4). Since the Flit includes the CRC, the DLLP and TLP do not carry their individual CRC bytes as they did in prior generations. We have also removed the PHY layer Framing Token for every TLP or DLLP, due to the fixed position of TLP/ DLLPs within a Flit. The fixed DLLP bytes helps with a predictable low-latency replay mechanism and reduces queuing overheads. These mechanisms help boost link efficiency to overcome the FEC and CRC overhead.

Figure 4: TLP arrangement in a Flit in a x16 Link

Three single Symbol correct capable FEC groups are interleaved across consecutive bytes, as shown using different color combinations in Figure 4. Each color is a different FEC group, comprising of 85B, 85B, and 84B respectively. Due to this 3-way FEC interleaving, no burst error can affect two Symbols of the same FEC group, as long as the burst length is <= 16. Thus, one occurrence of FBER in a flit can be corrected if the burst length is <=16 and we get no correlation errors across Lanes. PCIe 6.0 specification ensures that the burst length > 16 occurs wi

One thought on “The Evolution of the PCI Express Specification”