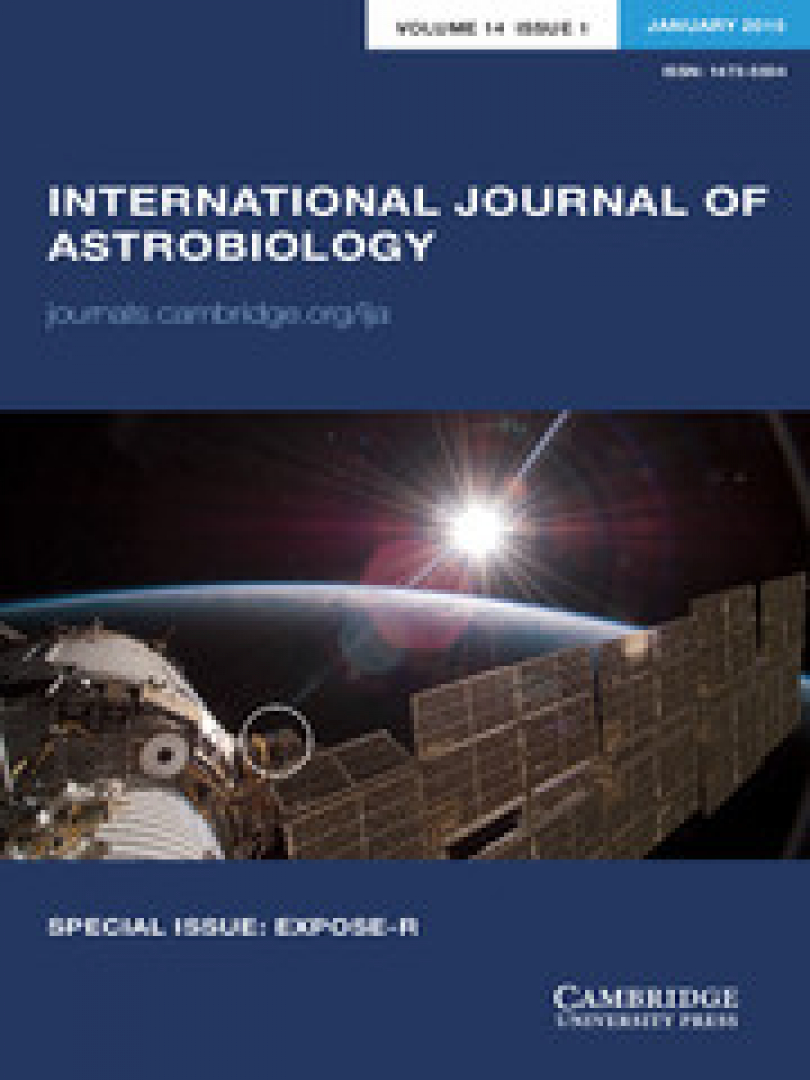 This is another nice ingredient!!

1. Introduction
As of October 2020, the WOW! Signal remains the strongest candidate SETI signal (Charbonneau, Reference Charbonneau2018). It has been suggested that the signal was produced by hydrogen clouds from Comets 266/P Christensen and P/2008 Y2 (Paris and Davies, Reference Paris and Davies2015). However, this hypothesis has been dismissed by the scientific community, and the source of the signal remains unknown (SETI Institute, 2017).

Despite the WOW! Signal never repeated, the key aspect was its duration. The signal lasted for 72 seconds, but since this was the maximum amount of time that the Big Ear radio telescope was able to observe, it is likely that the signal would have lasted longer.

The main problem, however, is that the signal never repeated. Follow-Up observations of the area conducted by many observatories during several years never detected another signal (Gray and Ellingsen, Reference Gray and Ellingsen2002). Nonetheless, the fact that the signal never repeated, does not necessarily rule out that it was produced by extraterrestrial intelligence.

In fact, if we analyse the history of (the few) radio signals that humanity have sent to several targets in the hope of contacting a civilization, none of those transmissions had a long duration or were repeatedly sent for a long time (The Staff at the National Astronomy and Ionosphere Center, 1974). An extraterrestrial civilization could have opted to behave in a similar manner.

Few attempts have been made to determine the exact location of the WOW! Signal due to the difficulty involved. Despite it was detected in just one of the two feed horns of the radio telescope, the data was processed in a way that does not allow us to determine which of the feed horns actually received the signal.

The other reason that makes difficult to determine the exact source is the high uncertainly in declination: 20 arcminutes. The following image shows an approximation of the two sections of the sky that could contain the source of the signal, each of them with thousands of stars.

Figure 1. In red, the two regions where the WOW! Signal could have originatedSource: Pan-STARRS/DR1

A 2002 study conducted by Robert Gray and Simon Ellingsen concluded that no emissions resembling the WOW! Signal were detected over a bandwidth of 2.5 MHz (Gray and Ellinsen, Reference Gray and Ellingsen2002). Other authors such as Wheeler (Reference Wheeler2014) also examined whether the transmission was an artificial signal. More recently, Harp et al., (Reference Harp, Gray, Richards, Shostak and Tarter2020) determined that no point-like features were found inside WOW! Signal region, although one point-like feature was detected about 1/3° away.

In this article an attempt is made to create a list of the possible sources of the signal assuming that, if it was produced by an extraterrestrial civilization, their exoplanet could be similar to Earth.

To filter an optimistic sample of stars that range from intermediate K to G type, several parameters were added. Radius_val (estimated radius of the star) was set between 0.83 and 1.15, teff_val (estimated temperature) was set between 4,450 and 6000 Kelvin, and lum_val (estimated luminosity) was set between 0.34 and 1.5 (Weidner, Reference Weidner2010). A conservative sample of candidate sources only include potential Sun-like stars with a teff_val between 5730 and 5830. Despite the effective temperature of G-type stars is considered to be between 5,200 and 6,000 Kelvin (Weidner, Reference Weidner2010), the conservative sample included a much smaller range of values: only those stars with an estimated temperature 50 degrees below that of the Sun and 50 degrees above. The limit of 50 degrees was chosen based on the (Cox, Reference Cox1999) attribution of a temperature of 5,830 K to G2V stars, the exact type of star that the Sun is. The difference between this temperature and the temperature of the Sun – 5,778 K – is 52 K.

G-type stars were selected due to the fact that the Sun is a G-type star, with a temperature of 5,778 Kelvin, and the only type of life we have found orbits this type of star. K-type stars were also selected because they are considered likely to host super-habitable planets, that is, planets more habitable than Earth, but not necessarily with similar flora and fauna (Heller et al., Reference Heller2012). However, the sample only included the upper half of K-type stars in terms of radius and temperature, and it excluded F-type stars due to the fact that the smaller the star, the more X-radiation it emits, and the bigger the star, the more UV radiation is emitted; both factors are considered detrimental for life as we know it (Andreoli, Reference Andreoli2020). For this same reason, and due to a generally higher rate of star flares that can erode atmospheres (France et al., Reference France2020), red dwarf stars were also excluded.

3. Optimistic sample of candidate sources
For the positive horn, the following list extracted from the Gaia Archive shows a total of 38 candidates that were found.

With the parallax values is possible to know how far each star is. The higher the parallax, the closer the star. Out of the 38 stars, the closest one seems to be source_ID: 6765765159947515264, with a parallax of 4.132 milliarcseconds, which is around 242 parsecs, or 789 light years. For the negative horn, the following list extracted from the Gaia Archive shows a total of 28 candidates that were found.

Maccone points out that the distance in which the existence of a communicative civilization is more likely is 1,933 light years away, which is 592 parsecs, equivalent to a parallax of 1.68 millarcseconds. In the sample of the positive feed horn, the star (apparently a G-type) closer to that distance is source_id: 6765741314288690304, located 1,961 light years away. This star has an estimated temperature 634 Kelvin lower than the Sun, a radius 5% lower, and a luminosity 43% lower.

Figure 4. 2MASS 19281982-2640123, the star with the temperature, radius, and luminosity most similar to the Sun found in the WOW! Signal region, based on data from to the Gaia Archive.Source: PanSTARRS/DR1

2MASS 19281982-2640123 could be, therefore, the only Sun-like star found among the thousands of stars located in the WOW! Signal region. The location of this star has a RA error / difference of 2.2 seconds and a DEC difference of 17 arcminutes with respect to the signal (Ehman, Reference Ehman1997).

Figure 6. This is figure 5 zoomed in on the candidates with a luminosity more similar to the Sun.

Apart from the three candidates mentioned above, in the Gaia Archive another 14 potential Sun-like stars in the WOW! Signal region were found. However, there is no available data about their luminosity and radius.

5. Conclusions
In this paper several candidate sources for the WOW! Signal have been suggested. In the region ranging from 19h25m31s ± 10s to −26°57′ ± 20′, and 19h28m22s ± 10s to −26°57′ ± 20′, a total of 66 G and K-type stars were found in the Gaia DR2 archive. Out of this sample, two stars are close to the celestial distance with the highest chance of having a communicative civilization, according to Maccone’s mathematical estimations.

With the available data, the only potential Sun-like star in all the WOW! Signal region appears to be 2MASS 19281982-2640123. Despite this star is located too far for sending any reply in the form of a radio or light transmission, it could be a great target to make observations searching for techno-signatures such as artificial light or satellite transits.

However, more information such as metallicity, age, and presence or not of stellar companions is needed in order to determine that 2MASS 19281982-2640123 is indeed a Sun-like star. Moreover, another two candidate stars have an error interval of their luminosity that covers the luminosity of the Sun, and three candidates more among 14 are also identified as potential Sun-like stars, but the estimations on their luminosity were unknown.

It is also important to mention that the signal could have come from any of the 66 G and K-type stars, a star that only meets one or two of the parameters set for the optimistic sample (in the WOW! Signal region, a total of 550 stars with a temperature between 4,450 and 6,000 K were found, but no information about their luminosity and radius is available), stars that are not included in the Gaia Archive, a star that is too dim to image with current technology, an extragalactic source, or any other origin.

In any case, since all these stars are located in the same part of the sky, it is ideal to search for techno-signatures in the whole region where the WOW! Signal could have come from.

Ehman, JR (1997) The Big Ear Wow! Signal What We Know and Don’t Know About It After 20 Years. Big Ear Radio ObservatoryGoogle Scholar

SETI Institute (2017) Was it ET on the line? Or just a comet?Google Scholar