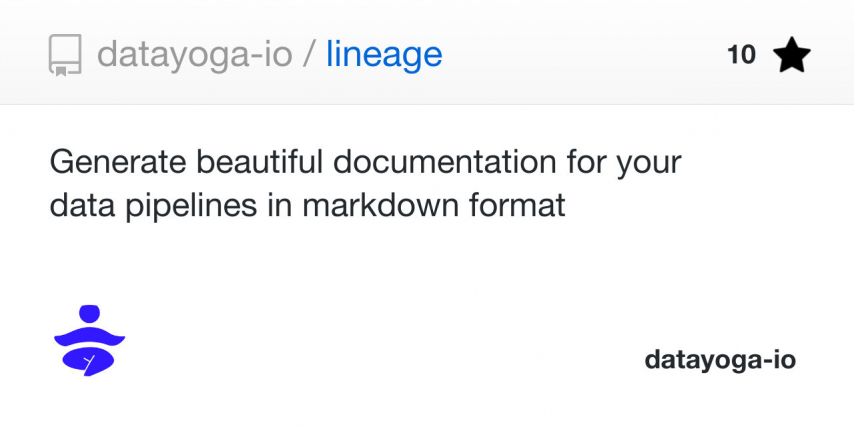 This package allows to generate documentation of data pipelines and data lineage charts. It is source agnostic and uses a predefined json/yaml format to represent the dependencies and business logic. The resulting markdown files can be used standalone or as part of a documentation site using tools like MkDocs or VuePress.

To quickly get started with Lineage, scaffold a new project. This will create the folder structure along with sample files.

To generate the documentation for the new project:

Datastore – A datastore represents a source or target of data that can hold data at rest or data in motion. Datastores include entities such as a table in a database, a file, or a stream in Kafka. A Datastore can act either as a source or a target of a pipeline.

File – A file is a type of Datastore that represents information stored in files. Files contain metadata about their structure and schema.

Dimension – A dimension table / file is typically used for lookup and constant information that is managed as part of the application code. This often includes lookup values such as country codes.

Runner – A runner is a processing engine capable of running data operations. Every Runner supports one or more programming languages. Some Runners, like a database engine, only support SQL, while others like Spark may support Python, Scala, and Java.

Consumer – A consumer consumes data and presents it to a user. Consumers include reports, dashboards, and interactive applications.

Pipeline – A pipeline represents a series of Jobs that operate on a single Runner.

Job – A job is composed of a series of Steps that fetch information from one or more Datastores, transform them, and store the result in a target Datastore, or perform actions such as sending out alerts or performing HTTP calls.

Job Step – Every step in a job performs a single action. A step can be of a certain type representing the action it performs. A step can be an SQL statement, a Python statement, or a callout to a library. Steps can be chained to create a Directed Acyclic Graph (DAG).

Lineage will scan the file(s) specified in input and attempt to load information about the catalog. In addition, a folder containing yaml files describing each pipeline’s business logic can be provided.

The catalog file contains the entity definition and metadata for each of the entities.
The node naming convention is: :.. Module name can be nested: e.g. order_mgmt.weekdays.inbound.load_orders

Lineage collectors enable to export lineage knowlege from external systems to be processed and documented.

About the author: Charlie Layers
Fill your life with experiences so you always have a great story to tell
Advertisements
Advertisements
Please login to continue.
Join and find an online community where thousands of people are posting their photos, videos and written articles daily.
Create account
No comments yet