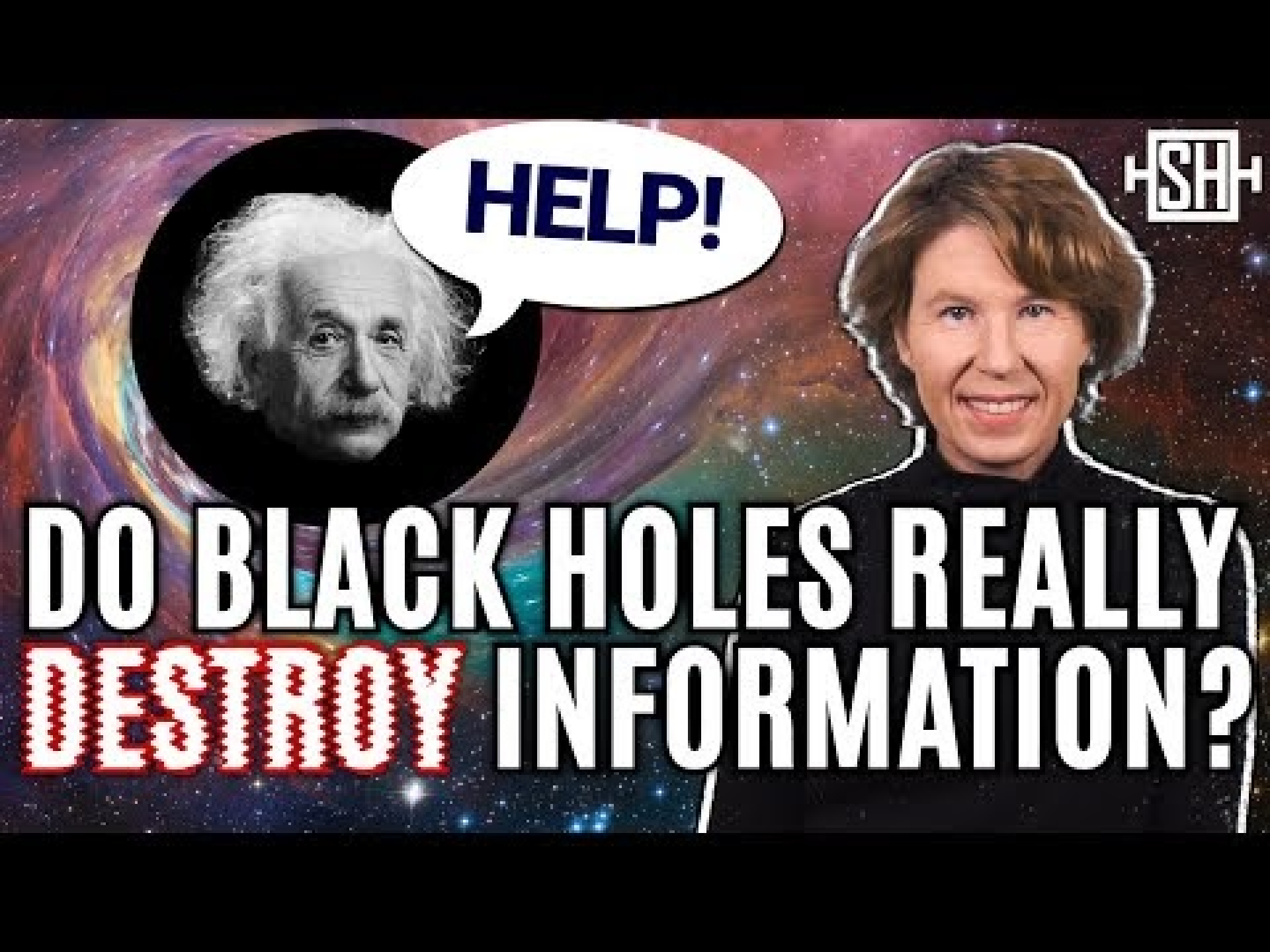 These modules are quite interesting.
[This is a transcript of the video embedded below. Some of the explanations may not make sense without the animations in the video.]

This is what Einstein’s theory of general relativity says. Yes, that guy again.
In Einstein’s theory of general relativity black holes are extremely simple.
They are completely described by only three properties: their mass, angular
moment, and electric charge. This is called the “no hair” theorem. Black holes
are bald and featureless and you can mathematically prove it.

But that doesn’t fit together with quantum mechanics. In quantum mechanics,
everything that happens is reversible so long as you don’t make a measurement.
This doesn’t mean processes look the same forward and backward in time, this
would be called time-reversal “invariance”. It merely means that if you start
with some initial state and wait for it to develop into a final state, then you
can tell from the final state what the initial state was. In this sense,
information cannot get lost. And this time-reversibility is a mathematical
property of quantum mechanics which is experimentally extremely well confirmed.

However, in practice, reversing a process is possible only in really small
systems. Processes in large systems become for all practical purposes
irreversible extremely quickly. If you burn your book, for example, then for
all practical purposes the information in it was destroyed. However, in
principle, if we could only measure the properties of the smoke and ashes well
enough, we could calculate what the letters in the book once were.

But when you throw the book into a black hole that’s different. You throw it
in, the black hole settles into its hairless state, and the only difference
between the initial and final state is the total mass. The process seems
irreversible. There just isn’t enough information in the hairless black hole to
tell what was in the book. The black hole doesn’t fit together with quantum
mechanics. And note that making a measurement isn’t necessary to arrive at this
conclusion.

You may remember that I said the black hole emits some gravitational waves. And
those indeed contain some information, but so long as general relativity is
correct, they don’t contain enough information to encode everything that’s in
the book.

Physicists knew about this puzzle since the 1960s or so, but initially they
didn’t take it seriously. At this time, they just said, well, it’s only when we
look at the black hole from the outside that we don’t know how reverse this
process. Maybe the missing information is inside. And we don’t really know
what’s inside a black hole because Einstein’s theory breaks down there. So
maybe not a problem after all.

But then along came Stephen Hawking. Hawking showed in
the early 1970s that actually black holes don’t just sit there forever.
They emit radiation, which is now called Hawking radiation. This radiation is
thermal which means it’s random except for its temperature, and the temperature
is inversely proportional to the mass of the black hole.

This means two things. First, there’s no new information
which comes out in the Hawking radiation. And second, as the black hole
radiates, its mass shrinks because E=mc^2 and energy is conserved, and that
means the black hole temperature increases as it evaporates. As a consequence,
the evaporation of a black hole speeds Up. Eventually the black hole is gone.
All you have left is this thermal radiation which contains no information.

And now you have a real problem. Because you can no longer say that maybe the
information is inside the black hole. If a black hole forms, for example, in
the collapse of a star, then after it’s evaporated, all the information about
that initial star, and everything that fell into the black hole later, is
completely gone. And that’s inconsistent with quantum mechanics.

This is the black hole information loss paradox. You take quantum mechanics and
general relativity, combine them, and the result doesn’t fit together with
quantum mechanics.

There are many different ways physicists have tried to solve this problem and
every couple of months you see yet another headline claiming that it’s been
solved. Here is the most recent iteration of this cycle, which is about a
paper by Steve Hsu and Xavier Calmet. The authors claim that the
information does get out. Not in gravitational waves, but in gravitons that are
quanta of the gravitational field. Those are not included in Hawking’s original
calculation. These gravitons add variety to black holes, so now they have hair.
This hair can store information and release it with the radiation.

This is a possibility that I thought about at some point myself, as I am sure
many others in the field have too. I eventually came to the conclusion that it
doesn’t work. So I am somewhat skeptical that their proposal actually solves
the problem. But maybe I was wrong and they are right. Gerard ‘t Hooft by the
way also thinks the information comes out in gravitons, though in a different
way then Hsu and Calmet. So this is not an outlandish idea.

I went through different solutions to the black hole information paradox in an
earlier video and will not repeat them all here, but I want to instead give you
a general idea for what is happening. In brief, the issue is that there are
many possible solutions.

Schematically, the way that the black hole information loss paradox comes about
is that you take Einstein’s general relativity and combine it with quantum mechanics.
Each has its set of assumptions. If you combine them, you have to make some
further assumptions about how you do this. The black hole information paradox then
states that all those assumptions together are inconsistent. This means you can
take some of them, combine them and obtain a statement which contracts another
assumption.  Simple example for what I
mean with “inconsistent”, the assumption x 1.

If you want to resolve an inconsistency in a set of assumptions, you can remove
some of the assumptions. If you remove sufficiently many, the inconsistency
will eventually vanish. But then the predictions of your theory become
ambiguous because you miss details on how to do calculations. So you have to
put in new assumptions to replace the ones that you have thrown out. And then
you show that this new set of assumptions is no longer inconsistent. This is
what physicists mean when they say they “solved the problem”.

But. There are many different ways to resolve an inconsistency because there
are many different assumptions you can throw out. And this means there are many
possible solutions to the problem which are mathematically correct. But only
one of them will be correct in the sense of describing what indeed happens in
nature. Physics isn’t math. Mathematics is a great tool, but in the end you
have to make an actual measurement to see what happens in reality.

What’s going to happen with this new solution? Most likely, someone’s going to
find a problem with it, and everyone will continue working on their own
solution. Indeed, there’s a good chance that by the time this video appears
this has already happened. For me, the real paradox is why they keep doing it.
I guess they do it because they have been told so often this is a big problem
that they believe if they solve it they’ll be considered geniuses. But of
course their colleagues will never agree that they solved the problem to begin
with. So by all chances, half a year from now you’ll see another headline
claiming that the problem has been solved.

And that’s why I stopped working on the black hole information loss paradox.
Not because it’s unsolvable. But because you can’t solve this problem with mathematics
alone, and experiments are not possible, not now and probably not in the next
10000 years.

Why am I telling you this? I am not talking about this because I want to change
the mind of my colleagues in physics. They have grown Up thinking this is an
important research question and I don’t think they’ll change their mind. But I
want you to know that you can safely ignore headlines about black hole
information loss. You’re not missing anything if you don’t read those articles.
Because no one can tell which solution is correct in the sense that it actually
describes nature, and physicists will not agree on one anyway. Because if they
did, they’d have to stop writing papers about it.