We live in a mobile, personal world, where more than 1.5 billion new mobile phones ship each year. Businesses that are most efficiently adapting to today’s “app economy” are the most successful at deepening customer engagement and driving new revenues in this ever-changing world. Where business opportunities abound, opportunities for “black hats” that conduct illicit and malicious activity abound as well.

Mobile app hacking is becoming easier and faster than ever before. Let’s explore why:

Hackers are increasingly aiming at binary code targets to launch attacks on high-value mobile applications across all platforms. For those of you who may not be familiar, binary code is the code that machines read to execute an application — it’s what you download when you access mobile apps from an app store like Google Play.

This is the first category of binary-based vulnerability exploits, whereby hackers conduct unauthorized code modifications or insert malicious code into an application’s binaries. Code modification or code injection threat scenarios can include:

This is the second category of exploitable binary vulnerabilities, whereby mobile app binaries can be analyzed statically and dynamically. Using intelligence gathered from code analysis tools and activities, the binaries can be reverse-engineered and valuable code (including source code), sensitive data, or proprietary IP can be lifted out of the application and re-used or re-packaged. Reverse engineering or code analysis threat scenarios may include:

You can see examples of these hacks “brought to life” on YouTube and a summary of Binary Exploits is provided in our graphic below. Whether your organization licenses mobile apps or extends your customer experience to mobile technology, the norm is that hackers are able to trivially invade, infect and/or counterfeit your mobile apps. Consider the following: 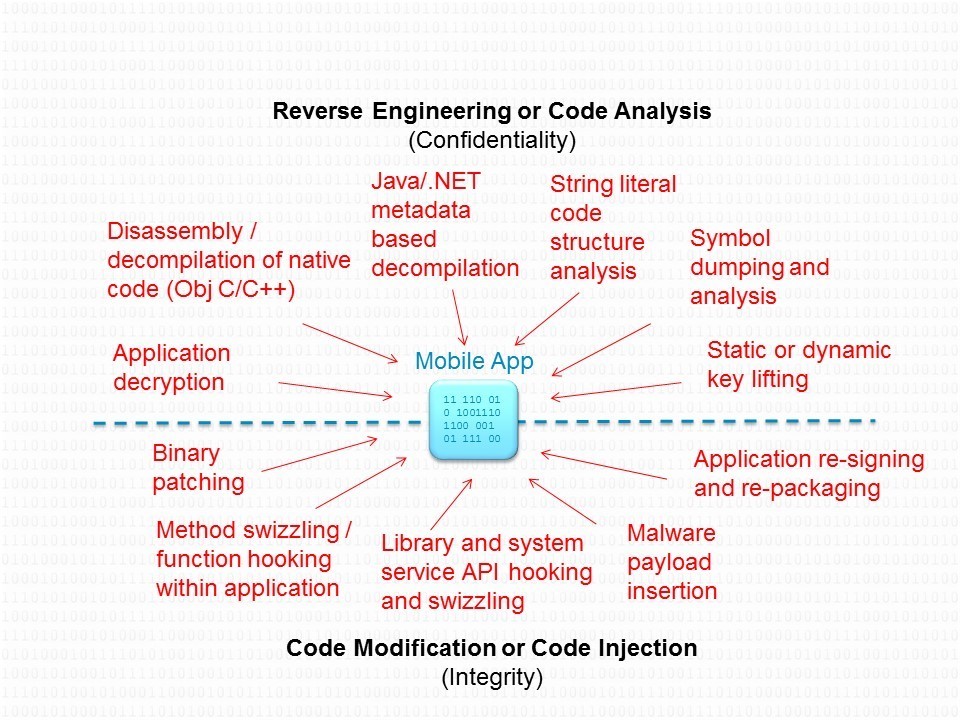 Time to Secure Your Mobile App

With so much of your organizational productivity riding on the reliable execution of your apps, and such a small a barrier for hackers to overcome superficial threat protection schemes, you could face significant risk unless you step up the protection of your application. It’s time to build trust in apps not just around them.

Application Hardening and Run-Time Protection are mission-critical security capabilities, required to proactively defend, detect and react to attempted app compromises. Both can be achieved with no impact to source code, via an automated insertion of “guards” into the binary code. When implemented properly, layers of guards are deployed so that both the application and the guards are protected, and there’s no single point of failure. Steps one can take to harden and protect apps at run-time are readily available.

Recent history shows that despite our best efforts, the “plumbing” of servers, networks and end-points that run our apps can easily be breached — so isn’t it high-time to focus on the application layer, as well?

Watch our YouTube video below to learn more about the importance of mobile security protection. And for the latest trends in mobile application security, consult our Ponemon Institute blog and companion report, titled “2017 State of Mobile & Internet of Things (IoT) Application Security.” We also encourage you to test-drive our mobile application security testing solution by signing up for a free trial of IBM Application Security on Cloud today.