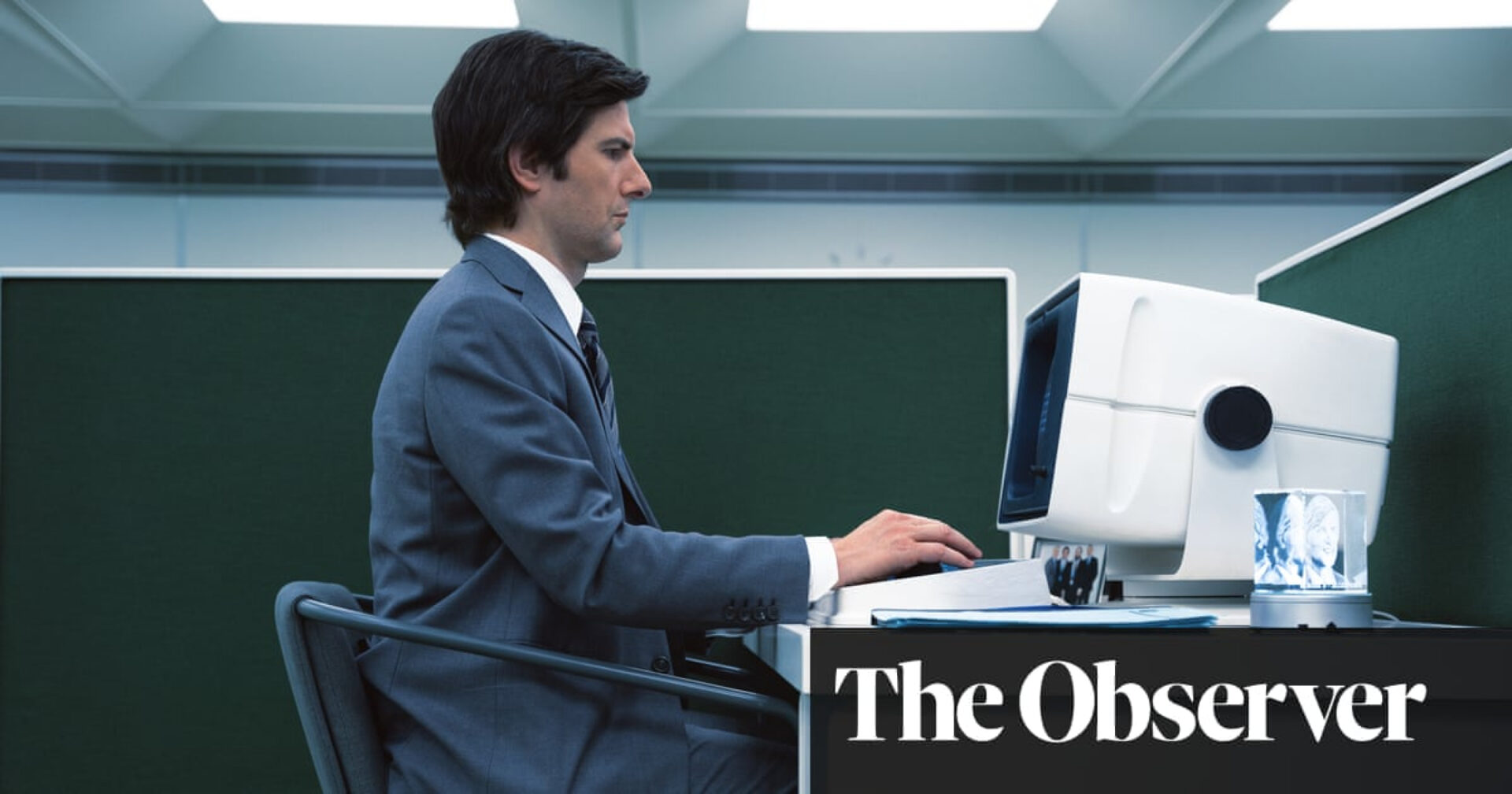 In the final minutes of the final episode of the genre-defining mockumentary The Office, our favourite disenchanted worker, Tim (Martin Freeman), neatly summarises the banal rhythms of the early 2000s workplace. “The people you work with are people you were just thrown together with,” he muses, noting that he spends more time with colleagues than his own friends or family. “But probably all you’ve got in common,” he adds, rubbing his nose, “is the fact that you walk around on the same bit of carpet for eight hours a day.”

Ricky Gervais’s sitcom was rightly celebrated for its unvarnished depiction of the mundane, tedious and often soul-destroying reality of office life, but – hang on. Eight hours a day? Carpet? Walking around? Twenty years and two recessions later, the monotonies of Tim’s office environment almost look like perks. Cosy carpets have been replaced by sleek, characterless hard floors. In 2021, desk workers slogged for two extra hours a day, regularly logging off at 8pm. And monitoring software means overworked and underpaid employees barely have time to stop for a natter, let alone set their co-worker’s stapler in jelly (for the third time).

Today, on the world’s 136th International Workers’ Day, we can see how recent cultural depictions of the workplace reflect these changed realities, and arguably reveal an even greater disillusionment with office life. The sci-fi series Severance, which debuted on Apple TV in February, follows employees of a mysterious, mammoth corporation who have had their work selves and home selves surgically split, so that the former have no memories of the latter’s lives (and vice versa). While Tim lamented seeing his colleagues more often than his loved ones, the “severed” employees of Lumon Industries have lost all of their intimate memories – they know nothing of their family and friends outside the office. Arriving at their desks with zero recollection of the night before leads to the unsettling sensation that they’ve been permanently at work.

And then there’s HBO’s dark comedy Succession, a bleak portrait of life at the top of a cutthroat family empire – and BBC’s Industry, which conversely portrays life at the very bottom, as graduates forgo sleep while they compete for jobs at an investment bank. There’s a precariousness in both that wasn’t as present in pre-recession workplace dramas; a sense that at any moment everything could be lost.

Martin Freeman and Mackenzie Crook in The Office. Photograph: Everett Collection Inc/Alamy“There’s a feeling captured in 90s and 2000s pre-crash media, that sense that you were bored and stuck at work,” says Amelia Horgan, a philosophy PhD student at the University of Essex and author of an examination of modern employment, Lost in Work, “whereas the dominant feeling now is the fear that the rug will be pulled out from under your feet without you realising, very quickly.”

Ash Atalla is an expert on how fictional workplaces have changed over the years – he produced both The Office and mid-00s IT department comedy The IT Crowd, and more recently, the estate agent sitcom Stath Lets Flats. “I think the trend is to go bigger on the world of work,” he says, noting that shows today focus on multinational corporations, not minor paper companies like The Office’s Wernham Hogg. “Now it would be like, ‘Who owns Wernham Hogg? Where are they based? Are they based in Holland?’ You’d want to see the superstructure of it.”

Perhaps that is because small companies are increasingly disappearing from our monopolised world – perhaps it reflects a growing awareness that our boss has a boss. While The Office focused on the haphazard mishaps of small-town buffoon David Brent, Succession centres on Murdoch-proxy Logan Roy, who eats small towns for breakfast. Rising inequality has led to greater scrutiny of the billionaire bosses at the top; you’re unlikely to finish your daily paper without reading something about Jeff Bezos or Elon Musk. “We’ve seen in the pandemic a massive transfer upwards of wealth, and we have a concentration of power and wealth,” Horgan says, “You can see a reflection of that.”

Myha’la Herrold in Industry, which followed the struggles of the new intake at a merchant bank. Photograph: Amanda Searle/BBC/Bad Wolf ProductionsIt’s no wonder that powerlessness pervades depictions of the modern office – Severance’s memory-holed employees have no idea what the data they’re working on actually is, and the severance procedure means they can’t take the corporation’s shadowy secrets into the light of the outside world. Mark Scout, the show’s protagonist, is played by Adam Scott – previously most recognisable as local government worker Ben Wyatt in NBC’s Parks and Recreation. Wyatt worked at a place that made tangible impact on the local community, a place where employees believed in “working hard at work worth doing”. In episode two of Severance, Scout’s date observes: “So you don’t know who you work with, or what you do, or anything?”

In Severance, escape is almost impossible – employees lodge complaints that go nowhere, and “code detectors” set off alarms when they try to get written messages into the outside world. Horgan notes that the theme of escape is present in a lot of modern workplace books; “There’s a surrealness in some of the new literature on work,” she says, “The way a desire for freedom is expressed is much more surreal.” She cites Kikuko Tsumura’s There’s No Such Thing As an Easy Job, in which a nameless narrator cycles through bizarre jobs as she searches for work that is “practically without substance”, and Lara Williams’s The Odyssey, about an alcoholic cruise worker who takes part in a cult-like employee-mentorship programme.

In Ottessa Moshfegh’s My Year of Rest and Relaxation, another unnamed narrator takes powerful drugs in her quest to sleep for a year after becoming disillusioned with her work at a gallery. “The art world had turned out to be like the stock market, a reflection of political trends and the persuasions of capitalism, fuelled by greed and gossip and cocaine,” the protagonist laments. Even work that is meant to be creative and fulfilling is ultimately empty. “I was perfectly happy to wipe all that garbage from my mind.”

Nicholas Braun and Matthew Macfadyen in Succession, set in a sprawling media empire. Photograph: HBOOf course, workers in The Office felt equally trapped and cynical – but at least they got an hour’s lunch break. (According to a recent survey by pickle brand Branston, the average worker now takes a 29-minute break, during which they regularly check their emails.) Atalla laughs when I mention this. “You’re absolutely right – the other day, my PA went out for like an hour for lunch, and I remember being just like, ‘For fuck’s sake…’! I remember when I was young and doing work experience people would go out to a restaurant together …I do think that’s gone.”

Rebecca Watson’s Little Scratch neatly illustrates the indignities of eating at your desk; a colleague who has sexually assaulted the narrator asks, “That taste nice?” as she’s eating, and she’s suddenly “struck by” the “phallic” nature of her breakfast. In fragmented, poetry-like prose, our unnamed protagonist (noticing a pattern?) later pleads, “maybe one day/I’ll leave!/(please)/of course I will/right”.

Lee Jung-jae in Netflix’s dystopian hit, Squid Game. Photograph: Noh Juhan/NetflixTaken together, these books and TV shows mirror how employees feel they are nameless, personality-less cogs in increasingly centralised machines. Over the course of the last year, the so-called Great Resignation has meant that many workers have seemingly escaped their dreary jobs – but questions have already arisen about whether there’s anywhere better to escape to.

For all its mundanity, The Office never went full-blown bleak (one colleague might ask you, “Will there ever be a boy born who can swim faster than a shark?” but another might turn out to be the love of your life). But such hope and humanity may be absent from the next wave of pop-culture workplaces. Gruelling gig-economy jobs, timed loo breaks, enforced commutes after months of working from home, rising bills, closing companies, the looming threat of redundancy – the desperations of 21st-century capitalism have been neatly reflected in Korean dramas such as Squid Game and Parasite, and it’s unlikely the depictions will end there. There’s brutality at the heart of the new workplace drama, as there often is at the modern workplace itself.