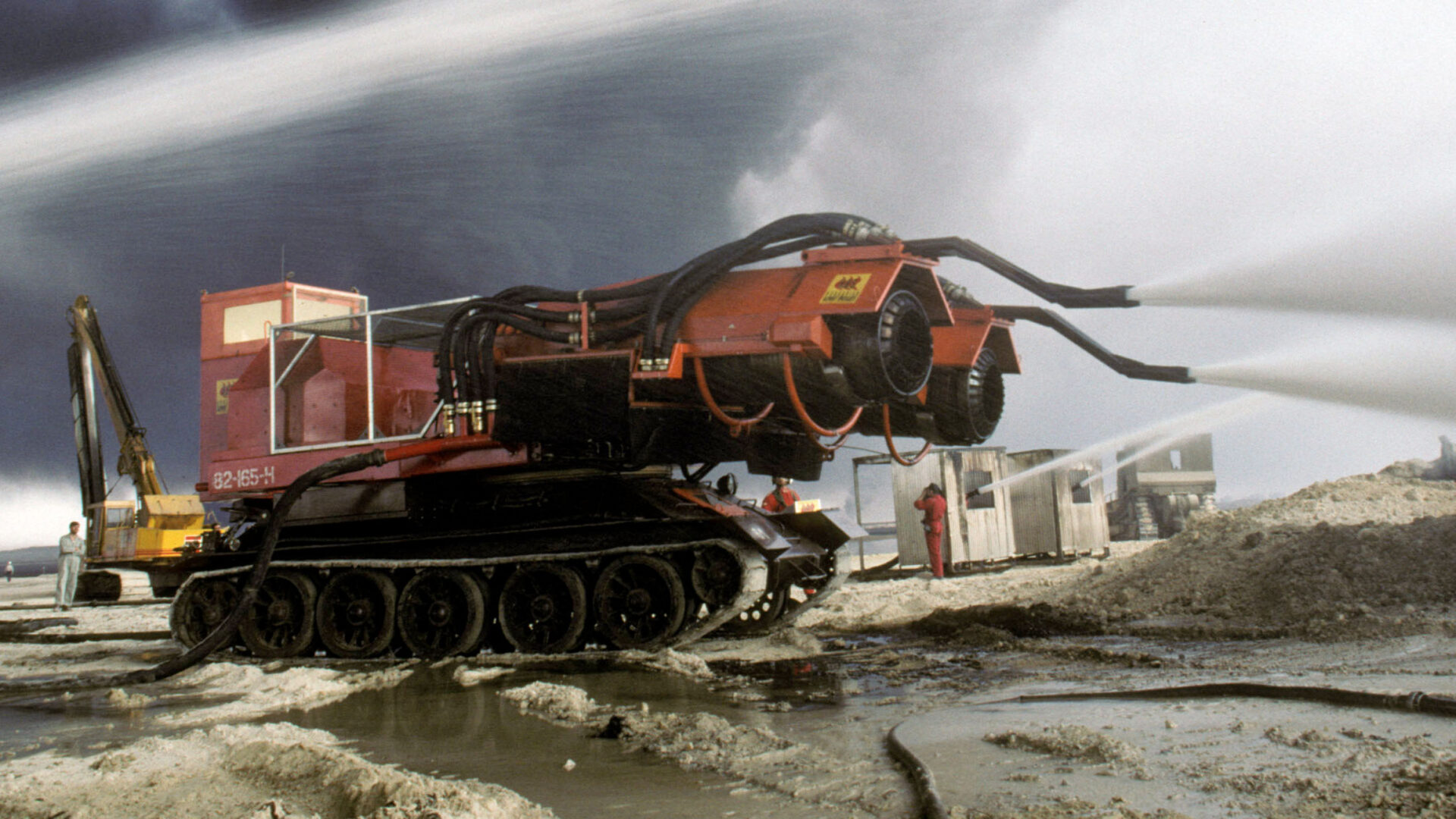 My room mate says this is interesting!!
As the Iraqi army retreated at the end of the first Gulf War, they took the term “scorched Earth policy” quite literally. Kuwaiti oil wells were set alight en masse, creating towering infernos that blackened the sky.

As it turns out, extinguishing a burning oil well is no easy feat. In the face of this environmental disaster, however, a firefighting team from Hungary made a name for themselves out on the desert sands, astride a jet-engined tank named Big Wind.

Big Wind was not the first of its kind, but a successful development of a concept first pioneered by the Soviet Union. Decades before, the Soviets had experimented with fitting MiG-15 jet engines on the back of ZIL-131 trucks. With a pair of water nozzles bolted Up just above the jet exhaust, a powerful blast of water and air could be used to effectively fight large fires. This idea became popular in the Hungarian oil industry, particularly after one example was used to put out a fire at the 168 Algyo oil well in 1968.

Big Wind on the ground in Kuwait, extinguishing a burning oil well. Credit: Getty Images
Decades later, in 1991, oil company MB Drilling was  putting the finishing touches on an advanced version of its own design in a town some 50 miles southeast of Budapest. Big Wind, as it came to be known, was built on the chassis of a Russian T-34 tank dating back to World War II. In place of the original gun turret, it instead sported a pair of Tumansky R-25 turbojets, as used in the MiG-21 fighter jet and producing 27,000 pounds of thrust. Each engine was then fitted with three water nozzles each, capable of delivering Up to 220 gallons of water per second. It was finished right around when Kuwait was desperate to extinguish hundreds of burning oil wells, and so was quickly deployed to the country via aerial transport.

The mechanism behind its firefighting power is simple. Oil blasting out of a wellhead is under pressure, and the primary flame is a good 15-30 feet clear in the air. The intense blast of water and air helps cut off the supply of oil to the flame, while also helping to suck huge amounts of heat out of the atmosphere and surrounding area. With the air around the burning wells reaching temperatures of 650 °F, and the sand below heating Up to 1300 °F, it wasn’t enough to simply put out the fire, either. Big Wind would continue to spray for a full 20 minutes after extinguishing the flames, ensuring the oil didn’t autoignite upon splashing back down on the scorching hot ground.

Operating the machine is no mean feat. A crew of three operate Big Wind, with a driver nestled inside the front of the machine responsible for crawling it towards the fire at its top speed of 3 mph, chosen to avoid damaging the relatively delicate jet engine platform above. At the rear, a second operator is charged with controlling the jet engines and water nozzles. The third member of the crew walks alongside roughly 15 feet from the tank, issuing commands to the others via a set of wired controls. The crew all wear flame-resistant gear to protect themselves from the immense heat, and gloves to avoid burning themselves on the tank’s controls when within 40 feet of a blaze.

Water for the operation was sourced from the Arabian Gulf, with saltwater pumped in using oil pipelines running in reverse. Reservoirs were dug specifically for the purpose, feeding Big Wind with thousands of gallons of water a minute with the help of huge diesel-powered water pumps.

Gallons of seawater were pumped into reservoirs to feed fire fighting apparatus charged with extinguishing the well fires in Kuwait. Credit: Getty Images
Inside, the driver received commands from outside, via LED arrows that would light Up to indicate the fire chief’s desired direction of travel. Similar methods are used to instruct the rear operator on when to fire Up the jets and water. Each crew member also has a dead-man switch system, which they must acknowledge regularly to indicate their safety during an operation.

Following the fire chief’s orders, the machine is then positioned as close as 25 feet to the burning well, and the R-25 jet engines fired Up to their safe maximum of 70% throttle at ground level. Then, the water nozzles are engaged and the burning well is quickly snuffed out. Once extinguished, and the area cooled off for 20 minutes with plenty of additional water, Big Wind is then reversed out of the area and the difficult work of capping the damaged well can begin.

Where Are They Now?
In its original form, Big Wind put out nine burning oil wells in Kuwait, more than many teams that were working with the more traditional method of blowing out well fires with the use of high explosives. The tank was captured in action in the IMAX film Fires of Kuwait, with Rip Torn narrating the action as the Hungarian crew battled the flames.

These days, however, the machine rolls around on the chassis of a more modern VT-55 recovery vehicle, which shares its platform with the later T-55 tank. The vehicle was mothballed after further years of work, placed in storage at Tokol airport until around 2013, before it was resurrected by Hungarian oil company MOL Group to once again undertake its original purpose.

The practice of fighting fires with big jet engines hasn’t really caught on widely. It’s all but useless for anything urban, where the powerful blast would cause excessive damage and injuries. Outside of the Hungarian oil subculture, the practice has been largely ignored by those more familiar with explosive techniques or the simple application of tons of water with conventional pumps and hoses. Regardless, Big Wind remains as one of the most impressive fire fighting machines ever built, and that title will likely not be challenged for some time to come.